The difference between England, Great Britain and the United Kingdom in the perspective of BREXIT 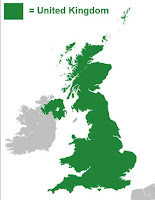 C'est quoi le Royaume Uni au juste, dans la perspective du BREXIT.
What countries make up Great Britain and the UK? Where is Scotland? Where is Wales? Where is England? and Northern Ireland? Surface areas, population, capitals and languages?

Great Britain is an island in Western Europe. It is in fact the largest island in Europe and the 9th largest island in the world. Politically, Great Britain is made up of 3 individual countries: England, Scotland and Wales. It also includes islands such as the Isle of Wight, Anglesey, the Isles of Scilly, the Hebrides and the island groups of Orkney and Shetland. It does not include the Isle of Man and the Channel Islands which are self-governing.

England is the largest country of Great Britain with a surface area of 130,395 km2 and the population is 53 million. The capital of England is London which is in the South East of the country. The official language is English.

Scotland has a surface area of 78,387 km2 and the population is just over 5 million. The capital of Scotland is Edinburgh and the largest city is Glasgow. The official language is English and there are also 2 recognised regional languages: Scots language and Scottish Gaelic.

Wales has a surface area of 20,779 km2 and the population is just over 3 million. The capital of Wales is Cardiff. The official languages are Welsh and English.

Northern Ireland has a surface area of 14,130 km2 and the population is approximately 1.8 million. The capital (and also largest city) of Northern Ireland is Belfast. The official language is English and there are also 2 regional languages: Irish and Ulster Scots..

https://www.crownacademyenglish.com/great-britain-uk-england/
Read more: History of the United Kingdom from the union with Irelnad to teh First World War  1914-1918
By pratclif at samedi, octobre 03, 2020