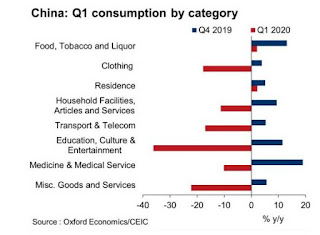 With much of the global economy now in some form of lockdown due to the coronavirus pandemic, we expect world GDP to contract by about 7% in H1 2020. Activity is expected to rebound sharply in H2, but even so the severity of the shock is likely to lead to a permanent GDP loss for the global economy. Pdf Executive summary is here. full report  only for subscribers
Excerpts:

In as much as China's production and consumption breakdown in Q1 may reflect what will happen with our own economies here's what may be our future  (click to enlarge).
at mardi, avril 21, 2020